Mechanism
Materials undergo thermal fatigue when they are mechanically constrained and subject to a temperature change. Cycled thermal expansion and contraction induces thermal stresses on the material. Over time, this cycling causes permanent structural changes that lead to crack formation and propagation. Temperature fluctuations cause contractions or expansions in steels. If the temperature change is slow, then these changes in length occur gradually throughout the structure. However, if the temperature change is rapid, then temperature gradients are present and the material is internally stressed to accommodate the length differences. These stresses can fatigue the material or even tear it apart.
Appearance
Thermal fatigue produces extensive surface cracks that propagate through the wall and result in a thick edged fracture. Numerous cracks will be present on the surface that is being quenched; a crazed cracking appearance is often found.  Thermal fatigue cracks usually initiate on the surface of the component and are generally wide and often filled with oxides due to elevated temperature exposure.

In steam generating equipment, cracks usually follow the toe of the fillet weld, as the change in section thickness creates a stress riser.  Often cracks start at the end of an attachment lug, and if there is a bending movement as a result of the constraint they develop into circumferential cracks in the tube.  The orientation of the cracks varies depending on the principal stress at the particular location.  Cracks form perpendicular to that stress and are always dagger shaped, transgranular, and oxide filled. Ligament cracking at the headers and cracking at the stub tube connections and attachments are typical of thermal fatigue.

Probable cause
Incorrect operation of the water control systems in the bottom ash hoppers and the water removal devices in the sootblower system. Water from several different sources enters the bottom ash hopper and causes flooding of the hopper. Malfunction of any of the inlet control valves or pluggage of the overflow drains can affect the normal water level in the hopper and raise it to a position where splashes and surges of water can reach the tubing. Water in the soot blower medium can be detected by observing drains when the boiler is in service and soot blower operation when the boiler is shut down. Thermocouple monitoring of economizer inlet temperatures can reveal the magnitude of feedwater temperature fluctuations. Condensate usually collects in the remote sections of SH and RH circuits, resulting in two major issues; thermal fatigue and short-term overheating. The temperature difference exists between the hot headers versus cold steam, or vice versa, produces thermal fatigue cracking and ligament cracking. Warm start-ups produce significant thermal fatigue damage since the temperature difference is usually higher. The tensile strength of the steel drops significantly beyond the design temperatures. Rapid start-ups and shutdowns as well as load changes can cause exfoliation of the ID oxide scale. If the exfoliation is excessive, it may lead to pluggage of bends or erosion damage in the turbine. At low temperature regions of the boiler, load cycling also causes thermal fatigue cracking in economizer inlet headers or tubes, lower furnace wall tubes or headers, and steam drum internals. This fatigue cracking primarily occurs from the ingress of cold water into hot boiler components or vice versa. 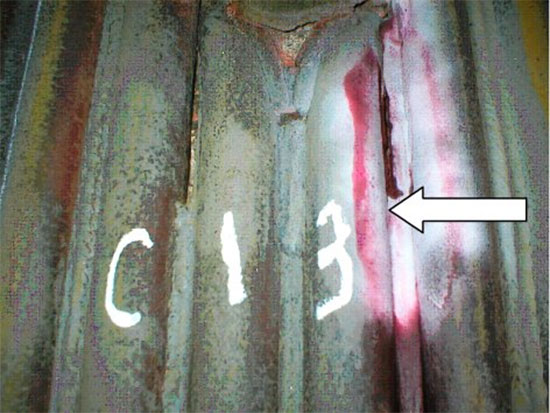 Corrective action
Corrective actions involve replacement of the damaged tubing when the depth of the cracks approaches the limits of the material to contain the internal pressure. Cracks with limited penetration can also exist. Control of feed water temperature should be established to prevent cracking of economizer inlet tubes and headers. Thermal fatigue is best prevented through design and operation to minimize thermal stresses and thermal cycling.  Several methods of prevention apply depending on the application.  Designs that incorporate reduction of stress concentrators through blend grinding weld profiles and smooth transitions should be used.  Controlled rates of heating and cooling during startup and shutdown of equipment can lower stresses where appropriate.  Differential thermal expansion between adjoining components of dissimilar materials should be considered; designs should incorporate sufficient flexibility to accommodate all differential expansion.  In steam generating equipment, slip spacers should slip and rigid attachments should be avoided.  Drain lines should be provided on soot blowers to prevent condensate in the first portion of the soot blowing cycle. Transient stresses due to load cycling affect the useful life of a DMW. Transient stresses can be reduced with slower start-ups. Condensate in the high temperature circuits creates major problems during start-up periods. The tubes should be baked for long enough to evaporate the condensate before increasing the heat input. Reduce the thermal gradient between the fluid and metal during start-up periods. Note that load cycling plays a major role in thermal fatigue. Once the component reaches equilibrium, thermal fatigue will not be a significant factor.
Inspection and monitoring
Since cracking is usually surface connected, visual examination, MT, and PT are effective methods of inspection.  External shear wave ultrasonic testing inspection can be used for non-intrusive inspection and where reinforcing pads prevent nozzle examination.  Heavy-wall reactor-vessel internal-attachment welds can be inspected using specialized ultrasonic techniques. The location of the quench cracking is not limited to any specific location.  All exposed areas must be considered and a reasonable strategy must be developed.  This strategy must include historical failure and replacement data as well as blowing patterns and cycles. The plant will ultimately determine the level of risk they are willing to accept. Since we have had a moving target we have had to employ the shot gun approach, sampling in all areas with greater scrutiny in what we project to be high risk areas. These would be areas of failures, high lance/cannon use or unusual blowing programs. This strategy will evolve over time when the variables begin to remain constant.
Common Locations
Typically thermal fatigue failures are located near soot cleaning devices, and areas where the fluid or steam temperatures may be considerably different than that of the flue gasses. Thermal fatigue can occur at locations that are:
1) Splashed by water from the bottom ash hoppers.
2) Sprayed by water from condensate in the soot blowing medium.
3) Subjected to rapid fluid temperature changes, particularly in economizer inlet headers and primary Superheaters of once-through boilers.
Reheater
Superheater
Water walls
Economizers
Bottom Ash Hoppers
Location Picture 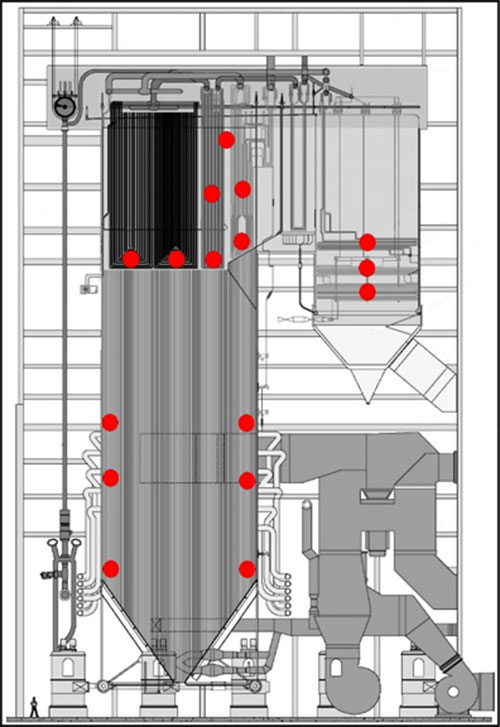