Mechanism:
Cracking of dissimilar-metal welds occurs in the ferritic side of a weld between an austenitic and a ferritic material.  The condition is especially acute when the weld metal used is an austenitic stainless steel similar to E309.  The cracking occurs because the expansion coefficients of ferritic steels and austenitic stainless steels differ by approximately 30%.  At operating temperature the differences in expansion lead to a high temperature stress in the heat affected zone on the ferritic side of the weld.  When the operating temperature is above 950°F, the heat affected zone is within the creep range and failure ultimately is classified by a creep style cracking mechanism.
External Appearance:
Dissimilar metal weld cracking produces a circumferential fracture in the joint.  The fracture is parallel to the weld fusion line in the ferritic steel.  The fracture surface follows a shape similar to the weld beads and appears as though the ferritic steel has not been fused to the weld metal.  Initiation of the crack can occur anywhere along the fusion line. A brittle, thick edged fracture results from the linking up of creep voids adjacent to carbide precipitates along the grain boundaries. 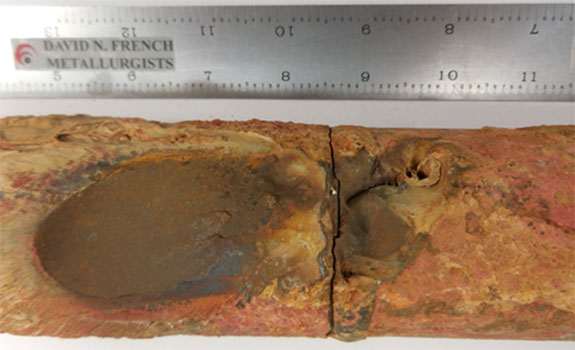 Probable cause:
Dissimilar-metal weld (DMW) cracking is caused by the application of temperatures and stresses that exceed the expected values and accelerate the creep process.  The total stress applied to the joint includes stresses that arise from differences in the thermal expansion coefficient; from internal steam pressure, tube dead weight, and through wall thermal gradients; and from thermal expansion constraints to due to tube support malfunction.  Variations in the lifetime of the joints are directly related to cycles of boiler operation. 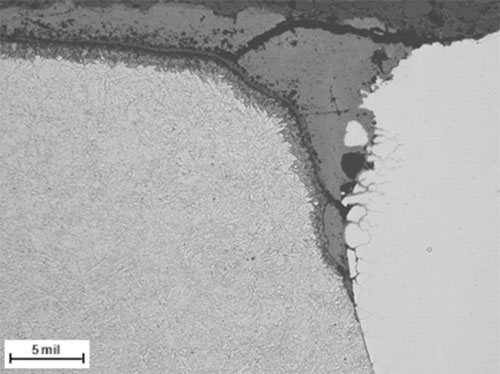 The root causes of DMW cracking can be verified by determining the actual operating temperature and applied stresses experienced during the service lifetime.
Cracks form at the toe of the weld in the heat affected zone of the ferritic alloy.  The most common failures are those welds between tubes; however, support lugs or attachments of austenitic stainless steels to ferritic stainless are also affected.  Poor weld geometry, excessive undercut, and other stress factors will aggravate crack formation.
Corrective action:
Stress and temperature are the critical factors; improved DMW performance can be obtained by controlling these factors.  The weld joint can be relocated to a position at a lower temperature.  A nickel-based filler metal can be used to lower the stress from differences in thermal expansion.  Frequent inspection and maintenance of tube hangers, supports, and spacers can be performed to reduce secondary loads.
The use of nickel based electrodes that have a coefficient of expansion closer to the ferritic alloys have proven successful and may dramatically increase the life of the joint.  The coefficient of thermal expansion of the nickel filler metal is closer to that of the steel, resulting in a significant reduction in thermal stress acting on the steel (ferritic) side of the joint.
If austenitic welding electrodes must be used, the dissimilar metal weld should be located in a low temperature region.  In steam generating equipment, the weld at the high temperature end should be made in the penthouse or header enclosure, out of the heat transfer zone.
Comment:
Dissimilar metal weld cracking may occur in Superheater and Reheater tubing at weld joints that:
(1) Have been exposed to temperatures exceeding the expected or design values
(2) Have been exposed to stresses exceeding the expected or design values.  Stresses are from intrinsic loads, primary loads, and secondary loads.
Radiographic and ultrasonic methods have been applied to detect cracking in dissimilar metal welds made with iron base filler metals.  The specific techniques used require careful interpretation since other weld defects and geometries can also produce NDE indications.  Representative tube sampling may be required to determine if incipient damage is present.

Affected materials:
The most common are ferritic materials such as carbon and low-alloy steels that are welded to austenitic stainless steels.
Critical factors:
Important factors include the type of filler metal used to join the materials and the exposure temperatures; thermal cycling will exacerbate the problem.  As the temperature increases, differential thermal expansion results in increasing stresses at the weld, particularly if a stainless steel weld metal is used.  At elevated temperatures the problem is intensified by diffusion of carbon out of the heat affected zone to the weld metal.  Loss of carbon reduces the creep strength, and the cracking potential is enhanced.  Carbon diffusion becomes a concern at approximately 800°F to 950°F for carbon as well as low alloy steels, respectively.
Stresses acting on the weld are significantly higher when austenitic stainless steel filler metal is used.  Nickel based filler metal has a thermal expansion coefficient closer to that of steel, resulting in a significantly lower stress at elevated temperatures.
Dissimilar metal welds may also result in a narrow region of high hardness at the toe of the weld near the fusion line.  High hardness zones render the material susceptible to various forms of environmental cracking such as sulfide stress corrosion cracking.
The problem may be accelerated by stress assisted corrosion in environments that promote liquid ash corrosion. The ferritic heat affected zone will preferentially corrode due to the large thermal strain.  The result is long, narrow oxide wedges that parallel the fusion line of the weld.
Affected Units:
Dissimilar metal welds are utilized in special applications in refineries and other processing plants.
1. Refining Industry: Dissimilar metal welds have been used in piping around the FCC Reactors and the regenerator vessel; in fire heater applications where the heater tube material changes from 5Cr or 9Cr to stainless steel; and in transitions in hydro processing reactor outlet piping from overlaid CrMo nozzles or piping to solid stainless piping.
2. Fossil Utility:  All Superheaters and Reheaters that have welds between ferritic materials similar to SA213 T-11 and SA213 T-22 and the 300-series stainless steels similar to SA213 TP304H, SA213 TP321H, and SA213 347H.
Inspection and monitoring:
In fire heated tubes, the cracks form primarily from the outside so that NDE must be utilized (i.e. visual, magnetic particle, liquid penetrant and Ultrasonic thickness measurements).  Environmental cracking will also result in surface breaking cracks initiating on the surface exposed to the corrosive environment and can be detected using similar methods.
Common Locations:
Reheater
Superheater
Locations 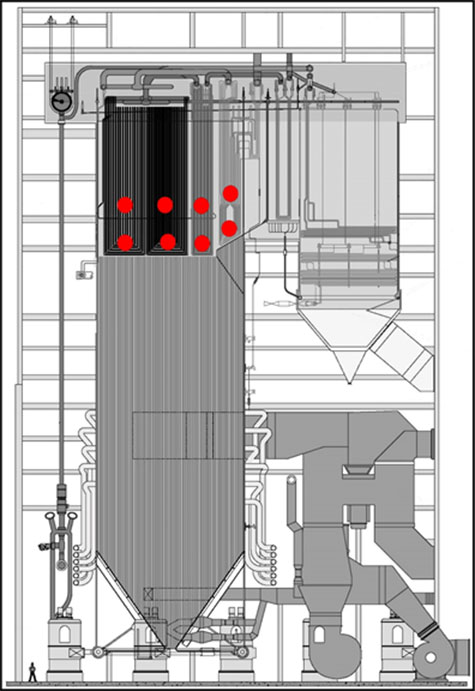