Mechanism
Graphitization occurs when carbon and low-alloy steels are exposed to temperatures above 800°F for long periods of time. This temperature promotes the decomposition of iron carbide into ferrite and graphite. Graphite is a relatively brittle, weak phase on the iron-carbon phase diagram. Evenly dispersed carbides throughout a steel do not present an immediate problem. However, when graphite nodules form in a continuous zone, the material is susceptible to catastrophic brittle failure.
Appearance
Graphitization damage typically appears as a brittle, circumferential fracture. The fracture forms along a line of graphite nodules that exist close to the HAZ.

Graphite nodules appear as small black dots within a larger ferrite-pearlite matrix. Aligned graphite nodules are referred to as “chain graphite” and cause brittle fracture. The overwhelming majority of graphitization failures occur at heat affected zones (HAZ) of weld joints. 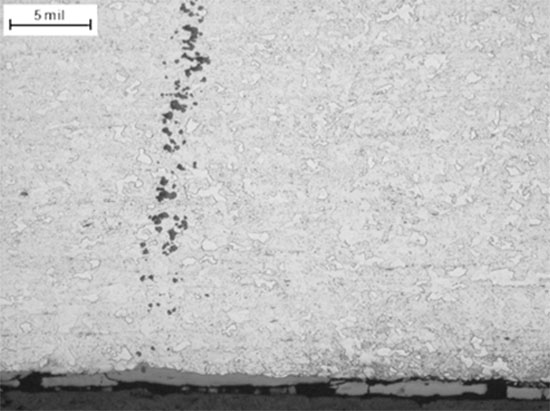 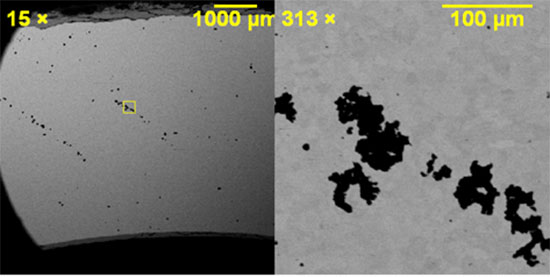 Probable Cause
Secondary combustion and tube operating conditions promote graphitization in carbon steels. Heat-affected zones and area with residual stresses from the tube straightening process are susceptible to graphitization. The typical microstructure of carbon steel is ferrite and pearlite. In carbon or carbon-molybdenum steels, the iron carbides are unstable when exposed to temperatures beyond 800oF for a prolonged period and therefore decompose into ferrite and graphite. These graphite particles reduce the strength of the steel and make the material susceptible to brittle failures. These materials are typically used in primary superheaters where the temperatures are expected to be below 800oF. However, it is likely that secondary combustion pushes the temperature in those regions beyond the sweet spots, causing premature failures.
Common Locations:
Primary Superheater
Primary Reheater
Locations 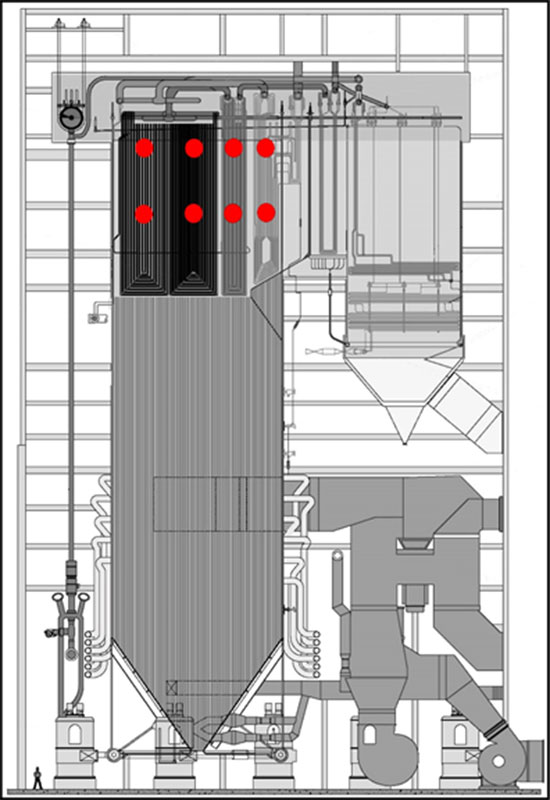 Corrective Action
A few options exist to determine the extent of graphitization. Metallurgical analysis can fully characterize the distribution and morphology of graphite nodules. Mechanical bend testing and fracture toughness testing can indicate if the material is embrittled from graphite formation. Upgrading to low-alloy steels such as Grade 11 or 22 eliminates the susceptibility to graphitization.