Two failed sootblower nozzles were submitted for analysis. All other nozzles, regardless of elevation and location, were also experiencing failures. The nozzles were in service for 5 years and were specified as RA-330 (UNS N08330) heat-resistant austenitic alloy material.
The retractable wall sootblowers had become stuck and burned when exposed to furnace conditions. These sootblowers have been operating from 25 (typical) to as high as 50 times per day. The plant was having delayed combustion, which was causing higher superheater/reheater temperatures. The sootblower media was high temperature steam at about 600°F, while the nose arch temperature was about 2500°F. The actual wall temperatures could be much lower. 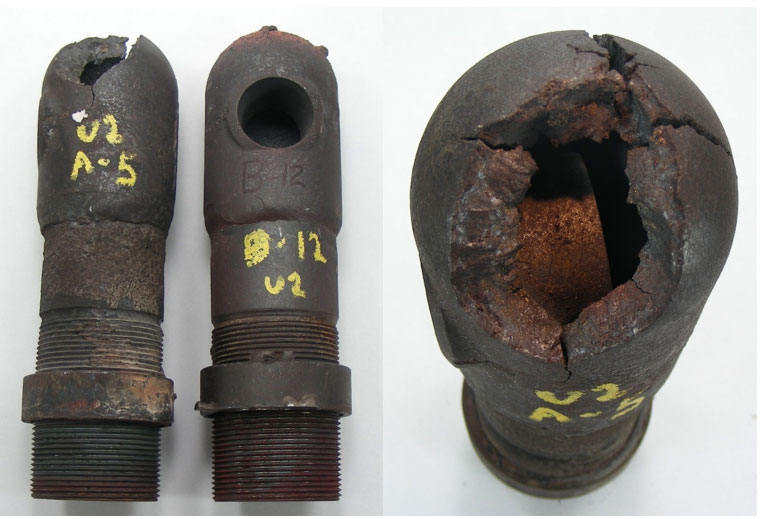 Failure Analysis: Sootblower nozzle tip B-12 failed due to thermal fatigue, likely from repeated quenching when the high temperature sootblower nozzle tip was exposed to the relatively cold steam/condensate in the blowing media. Higher operating temperatures were likely due to the location of the sootblower and/or poor shielding/retractable mechanism. The amount of carbon detected was higher than the specified maximum. Higher carbon content likely played a role in the failure, causing the cracks to propagate at a faster rate. The cracks may have followed the inter-dendrites due to lack of ductility. Higher carbon in the steel likely diminished the fatigue strength due to lack of ductility. The observed hardness was higher than the expected range.
Material Verification: The samples did not meet the chemical requirements for UNS N08330 (RA330) heat-and corrosion-resistant alloy (Ni-Fe-Cr alloy). Higher carbon was detected, perhaps due to diffusion of carbon into the steel during operation. However, away from the nozzle tip where it was not exposed to high radiant heat, the carbon content was also measured at 0.41%. This suggests that the nozzle may have contained higher carbon when it was new. Higher carbon content than the specified maximum is detrimental in oxidation and corrosion resistance. Over a period of time, the higher carbon in the steel may have combined with chromium and reduced its ductility, resulting in reduced fatigue strength. 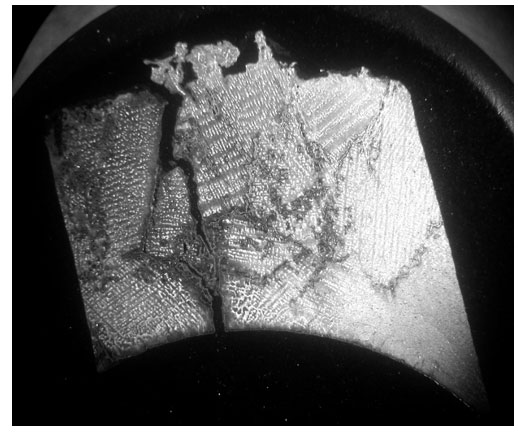 Severe cracks were visible at both the OD and ID surfaces of the nozzle
At higher magnifications, the cracking appeared to be thermal fatigue. Sudden temperature gradients over 200°F between hot steel and blowing media can induce significant stresses. Those thermal stresses would be closer to the yield strength of the steel. These repeated thermal cycles initiate thermal fatigue cracks both at the ID and OD surfaces, dependent upon stress levels. The appearance of the cracks suggests that these may have followed the inter-dendrites due to lack of ductility. Higher carbon in the steel may have diminished fatigue strength due to reduced ductility. Higher carbon content likely played a role in the failure, causing the cracks to propagate at a higher rate. 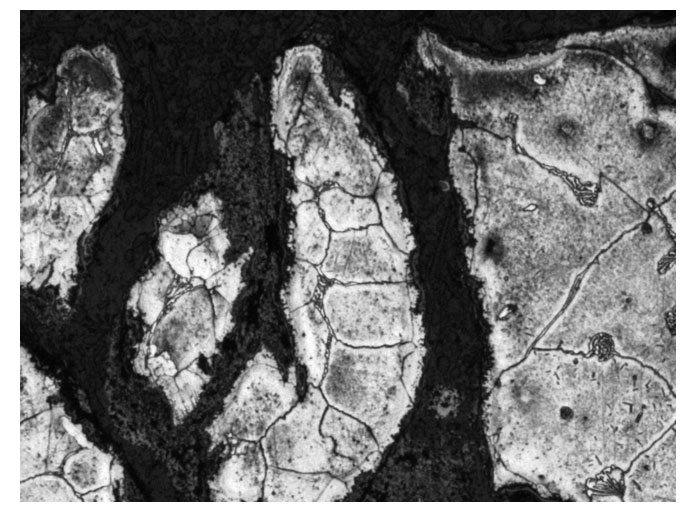 Severe cracks were visible at both the OD and ID surfaces of the nozzle
For more information email us at contact@davidnfrench.com or speak with us directly at 502-955-9847.