One 10.5” long section of stainless steel pipe was received for failure analysis. It was specified as 3” Schedule 10 (0.120”), TP304 welded stainless steel pipe. About 50’ was replaced out of a pipe that was a few hundred feet long. It had been in service for 12 years. The line is empty most of the time. The failure in this horizontal pipe was at the sides, although some ‘spider web’ indications were noticed in a few places.
The pipe carries a DMH (Dimethylhydantoin) solution of 32% water and 68% DMH. Electrical tracing is on the OD surface. The DMH flows inside the pipe at 92°F during its transfer and steam flows at 350°F during blowout. RO-based water was being used in the line, but there was less-pure water used ten years ago. The line operates intermittently about 3 hours per day and 5 days per week, including solution transfer and steaming out. There were no recent operational changes reported.

The cracking was along the entire length of the tube, not only at the obvious area, but also within the brown/rust-colored blotches. The tube ID was relatively clean, with no significant deposits. The cracking was more pronounced at the OD surface.
Failure Analysis: The pipe failed due to chloride-induced stress-corrosion cracking (CSCC). Severe, extensive transgranular cracking was observed at the OD surface.
OD Deposit Analysis: Significant soluble sulfate and chloride anions were detected. Austenitic TP304 stainless steel is susceptible to chloride-induced SCC. Relatively higher sulfate in the deposit also points to some contamination from an unknown source. 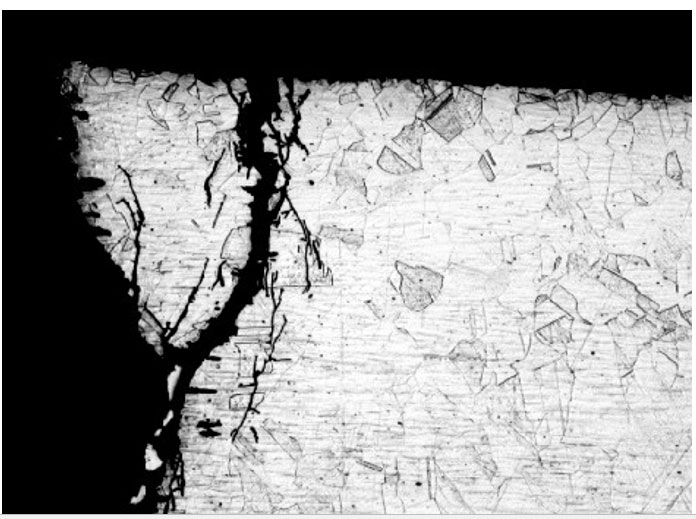 Severe branching of transgranular stress-corrosion cracking (SCC)
For more information email us at contact@davidnfrench.com or speak with us directly at 502-955-9847.