A 40 year-old superheater tube was analyzed to determine the cause of longitudinal cracking. The tube was specified as 2.0” OD x 0.438” MWT. The failure was just below a safe weld which was magnetic and verified in the field as T22 steel. However, this failure location was supposed to be stainless steel. A previous report from the same area indicated no signs of creep.
All the sections were magnetic except the section between the dissimilar metal weld (DMW) and the immediate butt weld, indicating it is stainless steel. OES testing was performed (labeled MV); the tube met the chemical requirements for ASTM SA-213 T11 Cr-Mo steel. The fracture was fish-mouthed in appearance and thick-edged, typical for a creep failure. Several longitudinal cracks were observed on the tube OD due to tube swelling. No hard phase was observed on the fracture face which precludes the possibility of short-term overheating. Ring samples were sectioned from the tube for dimensional and hardness measurements; the results (0.274-0.348”) were not consistent with 0.438” MWT. 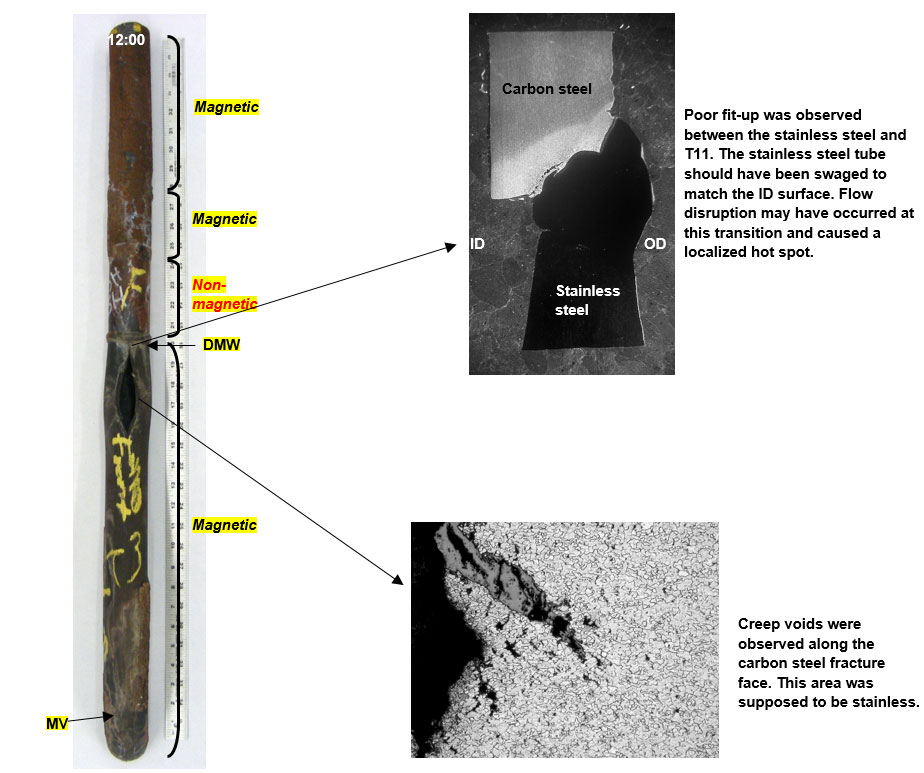 The tube failed due to the use of inferior material. Lower-grade 1½Cr- ½Mo T11 steel was used, resulting in severe creep damage. The allowable stresses and creep resistance are significantly lower for T11 material compared to TP 347H stainless. Poor fit-up may have caused flow disruption resulting in a localized hot spot. Therefore, the poor fit-up may have also contributed to the failure. The tube operating temperature was estimated at 1073 oF. This could be an underestimation due to broken oxide scale. The MWT is not consistent with the specified 0.438”; a relatively thinner wall was measured. The microstructure had transformed to spheroidized carbides in a ferrite matrix. Creep degradation was also observed away from the failure site.
For more information email us at contact@davidnfrench.com or speak with us directly at 502-955-9847.