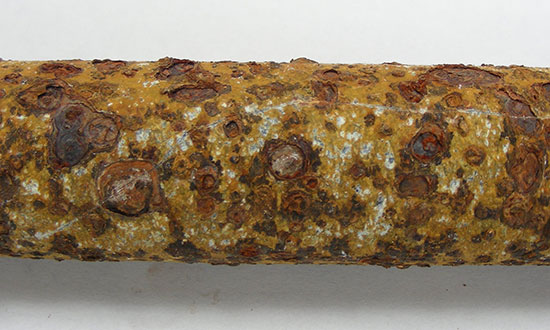 An ammonia evaporative condenser tube was received for failure analysis. The tube material was SA-178 A zinc galvanized carbon steel.  It had been in service for 3 years.  The sample was removed from the top row of the north condenser, near the inlet, presumably the hottest surface.
The condenser was receiving service about 2 months after startup.  Therefore, for the first couple of months it had been run with no water treatment or passivation. A significant amount of corrosion (including white, yellow and brown deposits) had developed and covered approximately 30-50% of the tube surface.  It was indicated that there were tubercles everywhere in the basin but they were especially noticeable at the water inlet. A phosphate passivation procedure was immediately performed on the condenser bundles and then a routine water treatment program was initiated.
The pH was controlled with carbon dioxide injection. The condenser had its own small sump beneath the ammonia tubes and water was recirculated over the tubes to condense the ammonia inside the tubes as a part of the ammonia refrigeration system.  All the water recirculation lines are made from copper and a substantial amount of soluble copper was detected in the water when ammonia leaks were present.
Portions of the zinc layer were corroded away. The corrosion of the base metal was not severe, likely due to the steel being cathodically protected by the surrounding zinc coating.  The zinc coating prevents corrosion by acting as a sacrificial anode.  It was indicated that the condenser failures occurred where the cooling water was dripping on to the tubes. Significant amount of white rust was also present there. In the absence of passivation, the galvanized zinc is susceptible to corrosion during the early period of operation. Due to the fact that passivation and water treatment were absent in the first two months of operation, corrosion of the zinc layer is likely. By the time passivation was carried out, the damage had been done and the base metal was already exposed to a corrosive environment. 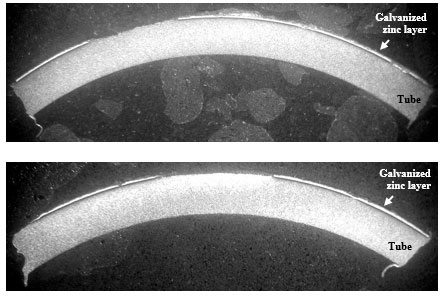 Elemental analysis was performed on deposits that were scraped off the OD surface.  Analysis was via energy dispersive spectroscopy in the scanning electron microscope (ASTM E1508-98((03)).  Carbon and sulfur were determined by Combustion Analysis (ASTM E1019-08).
The white deposit was primarily zinc oxide. Protective zinc carbonate may have also been present in the deposit due to the ongoing water treatment program and passivation. Zinc oxides and hydroxides are common rapid corrosion products of the zinc coating on galvanized steel due to lack of passivation. The yellow and brown deposits show a dramatic increase in the amount of iron present, likely from the corrosion of the base steel.

The condenser tube was suffering from white rust corrosion due to lack of passivation and heat treatment after installation. Zinc galvanized tubes are most susceptible to zinc oxide and hydroxide corrosion within the first 6 weeks after installation in the absence of passivation treatment. The received sample had no significant wastage in the substrate. However, localized regions of zinc corroded away, exposing the bare metal to the corrosive environment. Through-wall failures in other tubing may have been located where cooling water dripped onto the tubes, resulting in severe localized wastage from the absence of passivation. If a significant amount of the protective zinc layer was destroyed, then the corrosion of the base metal was inevitable.  The microstructure had transformed to ferrite and bainite, likely due to the galvanization process. The hardness was above the expected range also likely due to the galvanization.
For more information email us at contact@davidnfrench.com or speak with us directly at 502-955-9847.