Mechanism
Cold-work of austenitic stainless steels with precipitate-forming elements such as titanium, vanadium, or niobium can create excess defects in the material structure. These defects become sites for precipitation of carbides or carbo-nitrides at elevated temperatures below the solution-annealing temperature. This phenomenon can occur in the heat affected zone (HAZ) during welding of boiler tubes. Formed precipitates then pin defects and increase interior grain strength. However, due to diffusion properties at grain boundaries, precipitates do not pin as many defects at grain boundaries. The consequence of this process is a reduction in strength at the grain boundaries relative to the grain interior. Applied stresses concentrate and magnify at the weaker grain boundaries. The strain experienced in these regions can be significantly higher than expected. These strain-induced precipitation hardening failures typically occur during the first few years of component operation. 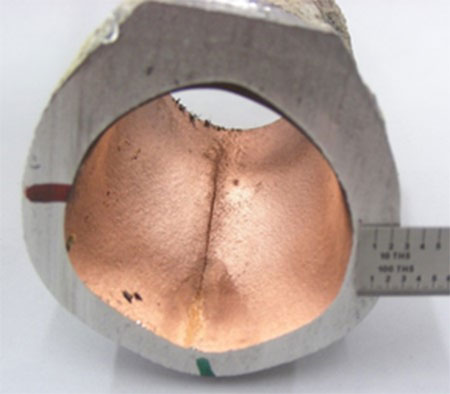 Appearance
SIPH failures are thick-edged with no significant wastage. The internal tube damage usually appears as grain boundary cavities and intergranular cracking. Longitudinal cracking occurs at the outside surface of the tube.

Theory
Superheaters and reheaters operate at a temperature where failures by creep may occur in most of the common alloys used in their fabrication. Creep may be defined as a time dependent strain or deformation at constant stress at elevated temperature. The temperature at which creep becomes an important design consideration depends on the particular alloy. For the low-carbon steels without any alloying elements besides manganese, grades similar to SA192, creep failures may be expected at metal temperatures as low as 800°F to 850°F. On the other hand, for the austenitic stainless steels similar to 304H, 321H, and 347H, the onset of creep occurs at temperatures above about 1000°F and is certainly a factor at 1100°F. In order to understand the high temperature problems of cold-worked stainless steel, we start with an explanation of creep and creep deformation. All useful metals are made up of individual crystals, usually called grains, which, in turn, are made up of individual atoms. For our purposes, atoms may be viewed as solid spheres and within the metallic crystal are regularly arranged over long distances. These distances are large when compared with atomic dimensions. There is, then, long-range atomic order within the individual grains. Any single atom is completely surrounded by other atoms and held in position by uniform and isotropic atomic bonding forces.
Where adjacent crystals join there is a crystal boundary or grain boundary, a zone of short-range atomic disorder. This grain-boundary region is about two to ten atoms thick. At this region of atomic disorder, individual atoms are less strongly bonded to their neighbors than are atoms within the crystal. The distances between atoms across the boundary are not uniform, and the atomic bonding forces are not quite the same as for an atom within the body of the grain. The atoms in the grain boundary are not held in place quite so strongly. The interatomic spacing is slightly larger, and individual atoms can be more easily removed. At room temperature, this grain-boundary weakness may be seen in preferential corrosion along grain boundaries and the simple etching of metallographic samples. At elevated temperatures, the grain-boundary weakness may be seen in intergranular oxidation and the strength, which is the tensile strength, of the grain boundary is less than the tensile strength of the individual grain. The temperature where strength of the grain boundary equals the strength of the grain is known as the "equi-cohesive temperature". This temperature may be taken as the onset of creep. Creep deformation occurs by the sliding of neighboring grains along the grain boundary. The blocks of atoms in the grain are stronger than the grain boundaries, and atomic bonds across the boundary are more easily broken. Creep deformation may be thought of as whole grains moving as a block relative to the adjacent grains, rather than individual plains of atoms sliding past their atomic neighbors within a grain.
Cold-forming, bending and swaging for example, of austenitic stainless steel during fabrication can lead to premature failure when the tube operates within the creep range. The cold work of these materials increases both strength and hardness, but the ductility is reduced. At low temperatures this compromise between improved strength and hardness and loss of ductility is used to gain an advantage in the overall strength of the material. As operating temperatures rise into the creep regime, premature cracking in the cold-worked material may occur. These conditions are exacerbated by notches, attachments, and other stress-concentrating factors.  In solution-treated materials when a grain-boundary creep crack develops, the growth or extension of the crack is slowed or is blunted by the soft and ductile neighboring austenite grains. The deformation energy of the movement of the grain- boundary crack is converted into plastic deformation in the crystals preceding the crack. In cold-worked material, the ability of the austenite grains to blunt the crack growth by energy absorption is diminished. Cold-worked grains are less ductile and can no longer "bend” to prevent further crack movement. The material is “creep brittle”. This loss of creep ductility leads to the following characteristics: 1) Failure is always intergranular; 2) there is little gross distortion of the component; 3) the austenite grains will display evidence of cold work, deformation twins within the grains. (these twins appear as straight lines across the crystal); and 4) the wall thickness at the failure edge is virtually the same as elsewhere, that is, there is no obvious ductility. The failure is along the grain boundaries.
Corrective Action
Failures from this phenomenon known as creep brittleness may be prevented by solution-treating after cold working. The temperature for this heat-treatment depends on the alloy involved, but is about 2000°F. An appropriate guideline to use is that the post cold-forming heat-treatment temperature should be equal to the solution-treating temperature given in the material specification. For 304H, 321H, and 347H, reference is made to SA213 specification, and 304H should be solution-treated at 1900°F, 321H and 347H should be solution treated at 2000°F. Solution anneal per ASME Section I PG-19 guidelines.
Common Locations:
Superheater/Reheater
Bends
Offsets
Swages
Welded Attachments
Locations Picture 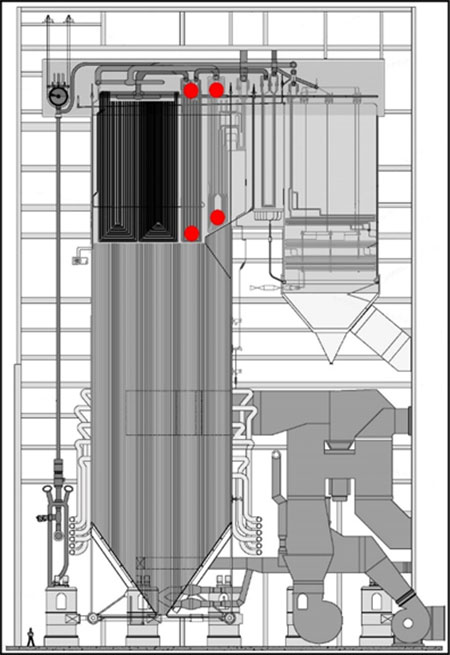