Mechanism
Coal ash corrosion remains a leading cause of failure in superheater and reheater tubes. Fireside corrosion occurs via two modes. In the first mode of corrosion, tube wastage occurs by the formation of low melting species which dissolve the protective iron oxides on carbon or low alloy (Cr-Mo) steels. In the second mode, the tube wastage occurs when there are reducing conditions inside the furnace, and iron sulfide scales form instead of protective oxides. These iron sulfide scales are more porous and less protective than oxides. Reducing conditions may also promote carburization of Cr-Mo, ferritic and stainless steels, resulting in a loss of corrosion resistance. Unburnt carbon and carbon monoxide carry carbon to the steel surface under reducing conditions. Formation of chromium carbides along the austenite grain boundaries and within the surface grains reduces the corrosion resistance of the stainless steel. Coal ash corrosion is caused by the formation of complex alkali-iron trisulfates in the ash deposits when the tube metal temperature is between 1000oF and 1250oF. High temperature coal ash corrosion produces tube wall thinning that eventually results in creep failures.
Appearance 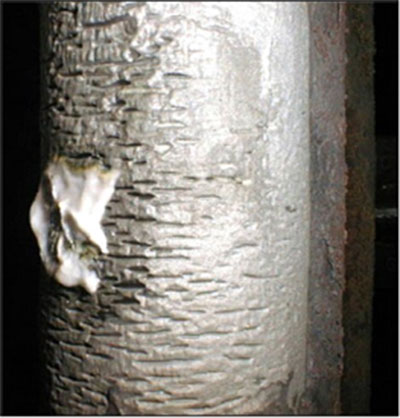 For coal ash corrosion, the appearance will be a smooth interface between a glassy slag layer and the tube metal.  Oil-ash corrosion is manifested as severe metal loss associated with slagging.  For oil ash corrosion of superheaters and reheaters, the appearance of the ash deposit will be in at least two distinct layers.  The important deposit is adjacent to the steel; this will have a dark gray or black appearance at room temperature; as the liquid sulfates sinter the corrosion debris to the surface.  That layer will be a hard, glassy, tenacious scale.  When removed, the surface of the steel will have an alligator-hide appearance, as shallow grooves will have penetrated the steel in a crosshatched pattern. Flat spots on the tube surface occur at the 2:00 and 10:00 orientations of the tube (30 to 45 degrees from the direction of gas flow).  Fractures are longitudinal and the outside surface may have an alligator hide appearance. Metallographic examination and deposit-analysis techniques can be used to verify the presence of coal ash corrosion. 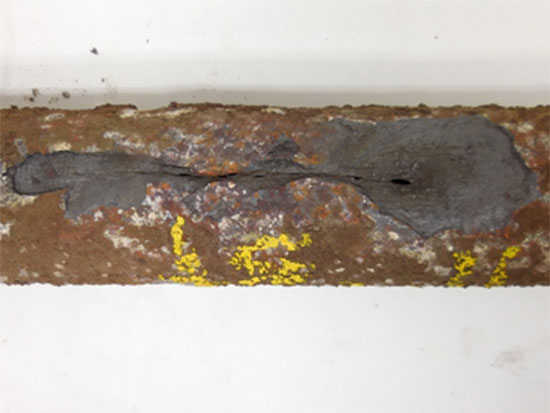 Cause
The root cause of coal ash corrosion can be verified by determining the corrosiveness of the coal ash and by measuring the tube metal temperature under the ash deposit.  Coals with chloride content of less than 0.2% and sulfur content of less than 1.0% have not produced significant corrosion rates.  Note that tube metal temperature and reducing environment affect the corrosion rates. 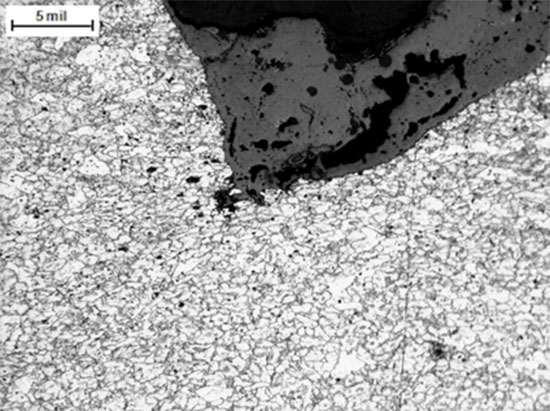 Corrective action
Corrective actions depend on the severity of the corrosion problem. An estimate of tube remaining service life should be performed on a non-failed tube sample. Several short term actions involve using thicker tubes, shielding the tubes, or coating with a thermal sprayed corrosion-resistant material.
Long term actions include replacing the tubes with a higher grade alloy or surface treated tube steel; blending the coal to reduce the corrosive constituents in the ash; or lowering the metal temperature by modification of the final steam outlet temperature and/or redesign of the tubing circuits.
Fuel ash corrosion can be prevented by blending or changing fuel sources (minimizing the contaminants) and by operating equipment so that hot components are below the limit at which slagging occurs.  Proper burner design and burner management help reduce flame impingement and localized hot spots.
In some cases, the characteristics and melting points of the slag can be changed by firing with low excess oxygen, or by injecting additives into the fuel.  These changes can increase the melting point of the slag and reduce the tendency of the deposits to stick to metal surfaces.  Even with changes to reduce slag formation, corrosion may continue if metal surfaces are not cleaned to remove slag and corrosion products.
Maintaining oxidizing conditions inside the furnace potentially eliminates the formation of porous iron sulfide scales instead of protective iron oxides. Inaccurate burner angles may result in localized reducing conditions. Therefore, burners should be adjusted per design to have the correct stoichiometric mixture. Installation of low NOx burners in coal-fired boilers has resulted in accelerated water wall wastage. These low NOx burners are expected to produce more H2S, instead of SO2 or SO3, in the combustion gas that promotes increase in the corrosion rates. Weld overlays of more corrosion resistant alloys like Alloys 625 and 622 have been proven to be a long term solution for fireside corrosion. The superior corrosion resistance of these superalloys in both oxidizing and reducing environments containing mixtures of acids has been attributed to the formation of Cr-rich oxides (Cr2O3).
Inspection and monitoring:
Visual inspection is usually sufficient to detect hot-ash corrosion.  Metal loss is likely to be severe, and the presence of a slag will be apparent.  Tubes need to be grit-blasted to remove the tenacious glass-like ash deposit.  UT examination may be useful to measure loss of thickness.
Ultrasonic (UT) wall thickness measurements and tube metal temperature measurements are taken to establish the corrosion rate and extent, and to calculate the effect of the corrosion on the service life of the tube steel.
Inspection over the length of a lead tube in one or more of the assemblies with the highest element steam temperature can show whether there is corrosion, and the elevations where it is greatest.  Removal of ash deposits by wire brushing or sand-blasting is performed prior to UT measurement.  The measurement is taken at the area of greatest metal loss, which usually is at 30 to 45 degrees location from the gas flow direction. 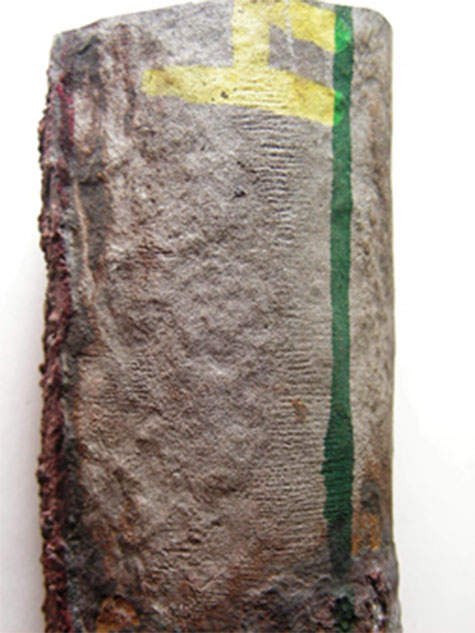 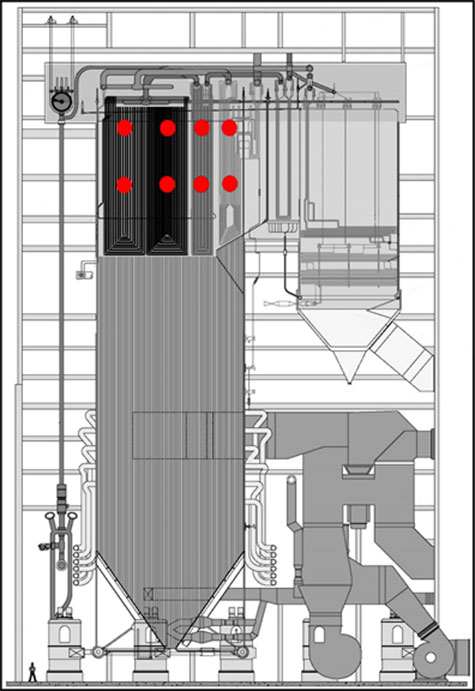