Mechanism:
Flow-accelerated corrosion (FAC) is still one of the leading failure mechanisms in HRSGs and conventional boilers, although it was recognized ~50+ years ago. It is also referred to as flow-assisted corrosion or erosion-corrosion. In earlier days, single-phase FAC was very familiar. However, two-phase FAC was not clearly understood until two decades ago. FAC is particularly higher in HRSGs due to higher fluid velocities resulting from a significant increase in volume from liquid to steam as it passes through the LP evaporator tubes. Also, multi pressure systems and changes in fluid volume have a significant effect on FAC in HRSG units. Note that FAC could be a precursor of under-deposit corrosion (UDC) as iron is transported to high heat flux areas from the feedwater train. Feedwater contamination is another major source of deposits that settle in the high heat flux areas and lazy circuits.
FAC is nothing but the dissolution of protective magnetite in the presence of the right environment; this dissolved magnetite is transported when turbulent flow exists. This process repeats in a cycle so that wastage occurs at a faster rate. FAC can occur in single-phase (water only) and two-phase (water and steam mixture). Note that the higher dryness fraction in the fluid reduces the susceptibility to two-phase FAC and completely eliminates FAC in saturated steam. Operating temperature plays an important role in FAC since it affects the formation and dissolution of oxide. At higher temperatures, the formation of iron oxide is controlled by the temperature. At moderate temperatures, the magnetite layer is porous and irregular, making it vulnerable to FAC. However, the formation of iron oxide is limited at low temperature and purely depends on the chemistry within the system. Single-phase FAC is typically associated with the boiler feed pumps and nearby components such as deaerator and feedwater piping. Single-phase FAC is consistent with an orange peel surface appearance and chevron marks. Two-phase FAC damage is typically found in pressure differentials between the source and recipient components. Horse-shoe pits, enamel-like appearance, tiger striping and a clear color difference of red and black are characteristics of two-phase FAC. 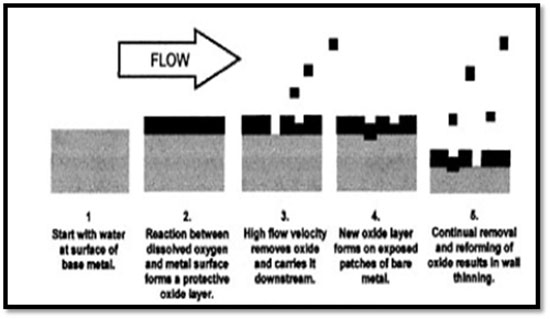 Single-phase FAC occurs between 100oF and 400oF with peak damage occurring at about 280oF. On the other hand, two-phase FAC occurs at a slightly higher temperature range of 250oF to 550oF with peak damage at ~300oF. Single-phase FAC is significantly affected by the reducing environment (<10 ppb of oxygen). Solubility of magnetite is reduced with the oxidizing environment. Therefore, it is recommended to operate units with oxygenated treatment (OT) or all volatile treatment AVT(O) without adding oxygen scavenging chemicals specifically in once-through boilers, supercritical units and HRSGs. However, this chemistry conflicts with mixed-metallurgy (copper based equipment) in the feedwater system since copper operates well in a reducing environment.
Although OT (30-150 ppb oxygen) is recommended, air in-leakage is strongly discouraged for several reasons. In some of the drum units, the chemistry does not coincide with the color appearance because of air in-leakage. Once the Oxygen scavenging chemicals are consumed, the air in-leakage causes feedwater components change to red color (hematite (Fe2O3) and iron oxide hydrate (FeOOH)) rather than magnetite (Fe3O4). 15 This might be beneficial for carbon steel components; however, it has a detrimental effect on copper-based equipment and copper transportation. Note that the oxidizing-reducing potential (ORP) does not have any effect on two-phase FAC since the oxidizing potential is associated with the steam phase and the surfaces touched with the liquid phase are still susceptible to FAC. Therefore, promoting oxidizing environment has no beneficial effect on two-phase FAC. This phenomenon can be easily distinguished with the color appearance. The darker appearance is from the reducing environment and the red-colored appearance is from the oxidizing environment. 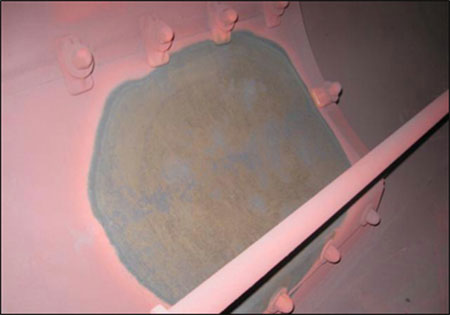 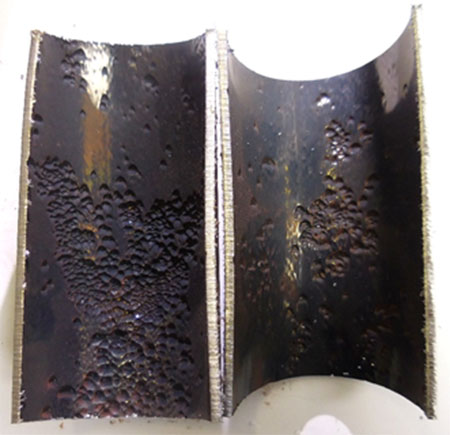 Corrective Actions:
Material selection plays an important role in single-phase as well as two-phase FAC. Research indicates that the carbon steel materials are susceptible to FAC. Adding chromium to the steel reduces the solubility of oxides due to the presence of stable chromium oxides. In complicated situations where options for controlling FAC are limited, material upgrade could only be the option to mitigate FAC. Note that the higher the chromium content, the lower the susceptibility to FAC (single or two phase FAC). Therefore, material upgrade to at least 1¼ Cr steel is recommended in chronic FAC cases. Another important aspect of FAC is turbulence. Note that the laminar flow in smooth tubing/piping does not cause FAC. It needs a turbulent flow (reducers, bends, deaerator shells, valves etc.) for mass transportation of dissolved oxides. Magnetite dissolution will be significantly affected by the pH of the feedwater; it is the second most important factor for FAC. Magnetite dissolution will be less with higher pH. However, there is a limitation on pH in drum boilers containing mixed metallurgy in the feedwater train since copper tends to corrode at elevated pH. HRSG units may need to be controlled with different pH for individual pressure stages (if possible) to mitigate FAC issues.
A plant's water treatment scheme should be included in the design stage of a power plant/HRSG. Therefore, material selection, specifically in the feedwater train, should depend on the water treatment program. Nevertheless, if the water treatment scheme is selected based on the plant's metallurgy, then the plant may need to operate with potential FAC issues. Make sure the water treatment program is changed following a material upgrade in the feedwater heat exchange equipment. If this upgrade is not done in a timely fashion severe wastage can occur in carbon steel materials. Note that carbon steel performs well in an oxidizing environment while copper based materials perform well in reducing environments with relatively lower pH.
Common Locations:
Locations susceptible to FAC in HRSGs:
• Steam separating equipment in LP evaporators (T)
• LP evaporators (S, T)
• IP evaporator tubes (S, T)
• Economizer inlet header/tubes (S)
• Deaerator shells (T)
• HP feedwater heater tube sheets (S)
Locations susceptible to FAC in conventional fossil plants:
• Feedwater drain lines (S and T), predominately occur here
• Piping around the boiler feed pump (S)
• Deaerator shells (T)
• Attemperator supply piping (S)
• Reducers/Expanders (T)
• Piping to economizer inlet headers (S)
• Economizer inlet header tubes (S)
• Turbine exhaust diffuser (T)
Where, T- Two-Phase, S- Single-Phase