Mechanism
Acid phosphate corrosion occurs where thick deposits are present with the right combination of feedwater chemicals and localized flow disruption or localized concentrating mechanism. The excessive addition of mono- or di-sodium phosphates in the water treatment chemicals leads to phosphate corrosion, as shown in equations below. The corrosion product will be white or grey maricite (NaFePO4). The addition of tri-sodium phosphates does not cause acid phosphate corrosion. This corrosion is localized where the phosphate hideout occurs. The local environment is very acidic underneath the deposits, although the bulk water is within the acceptable limits. The affected area may be gouged with distinctive layers of deposit; the inner layer will be white or grey maricite and on the outer layer reddish hematite may present. The gouged surface appears very smooth after removal of the deposits.
2Na2HPO4 + Fe + ½ O2 à NaFePO4 + Na3PO4 + H2O
2Na2HPO4 + Fe3O4 à NaFePO4 + Na3PO4 + Fe2O3 + H2O
3NaH2PO4 + Fe3O4 à 3NaFePO4 + ½ O2 + 3H2O
Appearance
Tube gouging is the trademark of acid phosphate corrosion.  This condition is usually identified by the sharp edge between the gouge and adjacent metal.  The multiple layers are white and gray with red speckle throughout.  Acid phosphate corrosion differs from hydrogen damage in that the latter is typically a thick edged failure. Acid phosphate corrosion differs from caustic gouging in that caustic gouging damage is evidenced by the sodium ferroate deposits found on the ID of the tubing. Maricite forms in cases of acid phosphate corrosion. The failure is typically thin edged due to ductile overload.

Cause
Acid phosphate corrosion occurs when deposits from feedwater corrosion components allow phosphate salts to concentrate. This leads to under deposit corrosion. This condition is in a family which includes hydrogen damage and caustic gouging. The three conditions are easily confused since they are similar in appearance.
This corrosive condition is caused by the compounding of an initial deposit coupled with the addition of mono- and di-sodium phosphate in an area where heat concentration is high. The area in which the water in the water wall tube is converted to steam (steam phase) is prime for this condition. This area varies from boiler to boiler but is typically identified as being just above the burners.  Chasing phosphate hide out with mono sodium phosphate or excess use of di-sodium phosphate in your chemical program is usually a source. Maricite is the key to determining whether acid phosphate corrosion is your problem.  Maricite is produced only when magnetite and mono di sodium phosphate react.
Common Locations
Water walls
High-heat flux areas
Lazy flow circuits
Locations Picture 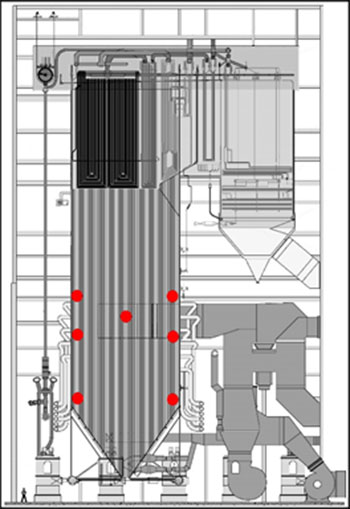 Corrective action:
This condition can be minimized by keeping the boiler clean on the water side, preventing the ingress of boiler water contaminants, reducing flow disruptions, reducing burner impingement, and reducing steam blanketing. Rifled tubing can reduce the risk associated with under-deposit corrosion. Periodically clean the boilers to reduce the risk of under-deposit corrosion. Reduce flow disruptions in the tubes. For example, avoid using backing rings during butt welding. Maintain equilibrium phosphate control. Use of mono or di-sodium phosphate should be avoided. Feedwater chemistry should be under control in terms of caustic levels.  Keep the amount of particulate iron oxide as low as possible by blow-down to prevent build-up of thick scales. 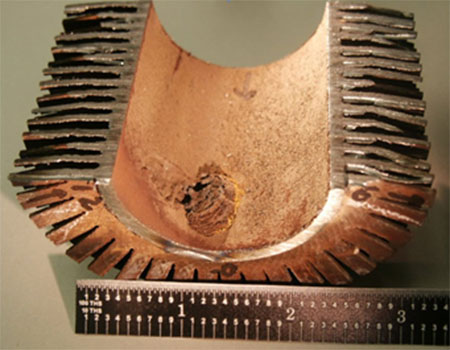 Email contact@davidnfrench.com or call 502-955-9847 to speak directly with a member of the DNFM team.