Mechanism
Sulfur and chlorine species in fuel form sulfur trioxide and hydrogen chloride within the combustion products.  At low enough temperatures, sulfur trioxide and water vapor in the flue gas condense as sulfuric acid, causing rapid corrosion. At lower temperatures, hydrochloric acid may condense and promote corrosion of carbon steels and stress corrosion cracking of stainless steels.
During fuel combustion, sulfur oxidizes to form SO2 and consequently SO3. The free SO3 in the flue gas reacts with moisture to form sulfuric acid (H2SO4). The concentration of H2SO4 depends on the SO3 and the moisture content; hence the acid dewpoint temperature in the flue gas will vary accordingly. The condensation temperature of H2SO4 is approximately 250-300oF and below. The dewpoint of sulfuric acid depends on the exact concentration of sulfur trioxide in the flue gas but is approximately 2800F.   Note that a combination of hydrochloric acid (HCl) and hydrobromic acid (HBr) can condense at a lower temperature and it could be as low as 130oF.
Appearance
Acid dewpoint corrosion produces tube wall thinning that eventually results in ductile rupture of the steel. The external surface exhibits a gouged appearance where the corrosion activity has occurred.  A thin edged fracture surface is produced when the load carrying ability of the steel is exceeded.  Sulfuric acid corrosion on economizers or other carbon steel components is evidenced by general wastage with the sulfuric acid condensation perhaps forming broad, shallow pits. 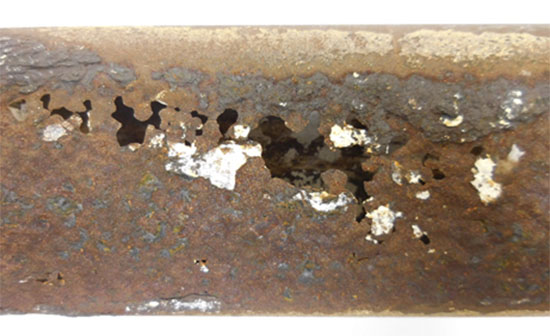 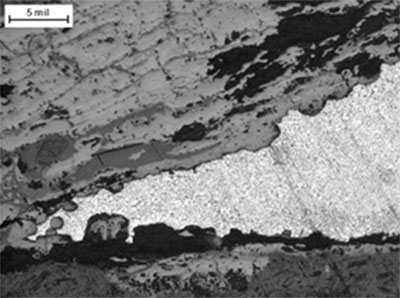 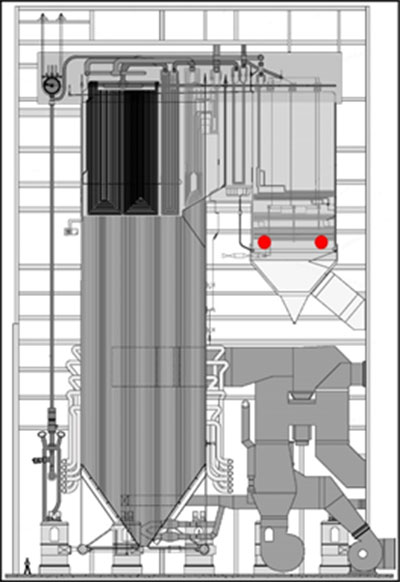 Preventative Maintenance and Repairs
Visual examination and ultrasonic wall thickness (UT) measurements are used to detect and monitor acid dewpoint corrosion. Upgrading to corrosion-resistant materials such as Inconel or fiberglass-reinforced plastics (if applicable) is recommended if corrosion rates are unmanageable. 300-series austenitic stainless steels are not recommended due to the risk associated with chloride-induced corrosion or stress-corrosion cracking (SCC).
Email contact@davidnfrench.com or call 502-955-9847 to speak directly with a member of the DNFM team.