Under Deposit Corrosion of Pipe Nipple

A failed Pipe Nipple was received for failure analysis and ID deposit chemical analysis. The pipe was specified as 0.168” MWT, SA-213 304L stainless steel. The nipple was installed about 5 years ago and was used as a pressure tap for pressure indication. Nitric acid vapor flowed through the nipple at 120 psi and 500°F. The nipple thinned to failure and was plugged with deposits at the failure as shown below.

The failure location was sectioned from the rest of the nipple and split down the middle as shown below. The wastage appeared to be localized at the failure location. Minimal ID scale was observed after black deposits were removed for chemical analysis. Note there is a butt weld just upstream of the failure. It’s possible a low pressure area was created by this butt weld, allowing deposit to build up. 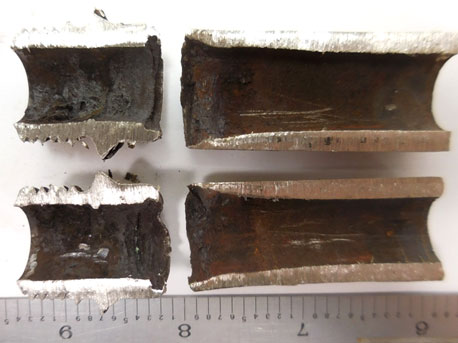 The images below illustrate that the pipe nipple was suffering from significant intergranular corrosion with a thick deposit. This indicates that the tube likely failed due to under-deposit corrosion. Flow disruption by the butt weld just upstream caused deposit to collect at the failure location leading to the localized corrosion damage.

The ID deposits primarily consisted of iron, oxygen, and chromium which were corrosion byproducts of the chemical reaction between the pipe nipple and nitric acid. Copper, manganese, silicon, zinc and nickel were also likely sourced from corrosion of the pipe nipple. Phosphorus was likely present from water treatment chemicals. Note nitrogen was not scanned because it is too light to be analyzed by EDS, but there was likely some present given the operating conditions. 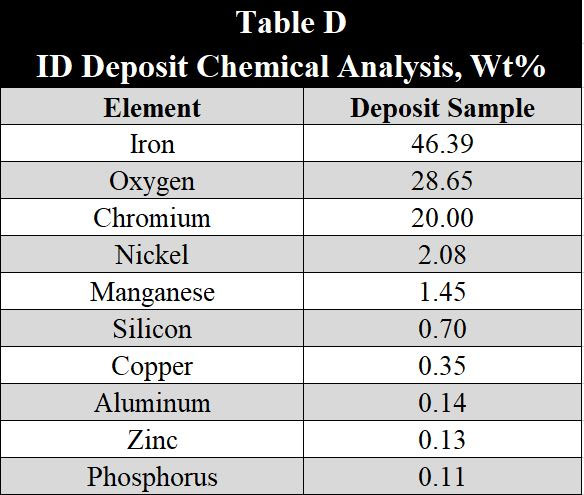 The pipe nipple failed due to severe wastage caused by under-deposit corrosion. A butt weld just upstream from the failure location likely created a low pressure area at the failure location. The deposit was able to build up creating almost 100% flow blockage. Under the deposit intergranular corrosion thinned the pipe to the point where the tensile load was too great and the pipe failed.
For more information email us at contact@davidnfrench.com or speak with us directly at 502-955-9847.